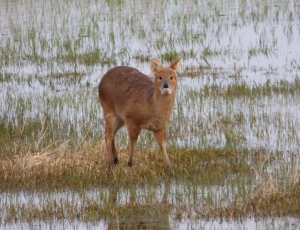 Late autumn last year was unusually wet, and late winter this year has also been unusually wet and windy. Many birds may be able to adapt to changing water levels more readily than other wildlife, but prolonged wet and windy periods (perhaps especially in late winter) are a challenge for some birds including owls.

Little Owl is one of the species whose local population has recently declined, presumably because there are now too few invertebrates to support them. It remains to be seen whether  they will be added to the list of species formerly widespread in Rutland which can’t easily be found within an hour’s drive.

A visit to the Cambridgeshire fens – which were not exceptionally flooded – during a lull in the weather on 19th February was rewarded with good views of at least seven Chinese Water Deer, along with some early display by Marsh Harriers and a pair of Cranes. Recent highlights in Rutland have included more Scaup and a Merlin (scarce here). 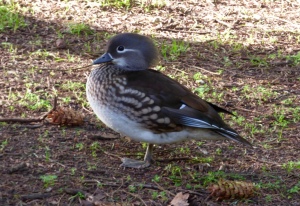 As often happens at this time of year, periods of warm spring-like weather have been interspersed with cold, wintry conditions. It makes a huge difference to how much birds vocalise: for example, the wintering Chiffchaffs in Oakham were in song on 23 January but hardly even calling today.

A wonderful morning in the Brecks on 5 February began with Woodlarks in song at dawn, followed by Marsh Tit in song and later some displaying Mandarins. Mandarin is one of the non-native species which has established self-sustaining populations in Britain, and today I recorded the flight call from a small flock in Rutland.

The wintry conditions look likely to persist into next week, then we might enjoy another spring-like spell. 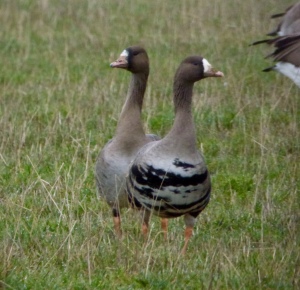 It’s always refreshing when people outside the usual circle show interest in our work. Recently I received this email from a correspondent in Yorkshire:

My other passion is playing the acoustic guitar and I write my own instrumental music, frequently playing it over the top of bird song. I can’t claim to be well known or successful, but I get a lot of pleasure out of it and I’m trying to put together a collection of recordings for an album in the months ahead. There are a number of your recordings of bird calls that I would very much like to add to some of my tracks. The one that has especially caught my attention at the moment is one of red throated divers that I would like to use on a piece inspired by NW Scotland. The recording of Red-throated Diver can be found here: https://www.xeno-canto.org/477779

During the past year I’ve made hundreds of sound recordings of over 150 species, and aim to continue throughout the year ahead. Recording highlights in the East Midlands during the last two weeks of January have included White-fronted Goose, Waxwing, and Red-crested Pochard. In the past week birdsong has increased significantly, and will grow during February (weather permitting). I’ll be listening – will you?

In Rutland, my most notable sightings during the past fortnight have included leucistic male Red-crested Pochard, Red-throated Diver (rare here), Slavonian and 2 Black-necked Grebes, the long-staying escaped Bufflehead, the largest flock of Greenfinches (90+) I’ve seen for some time, 2 Whooper Swans, and a Hawfinch yesterday at Leighfield well away from more traditional local sites.

Whilst visiting family in Oxford we visited Harcourt Arboretum on 10th to look at the Peacocks. We saw at least three males and a female with three juveniles, but their credentials as self-sustaining seemed unconvincing.

The undoubted highlight of the period was a visit to Suffolk on 13th. Following advice from Peter Kennerley I arrived at Dunwich at dawn, and by the time I had walked to Walberswick had already seen 3 Great White Egrets, 2 Bitterns and a Short-eared Owl amongst other things. Better still, I had the place to myself along with the Eastern Yellow Wagtail which was vocal (recordings on xc) and gave excellent views – the first I’ve seen since the ‘split’. Later that morning I also sound-recorded Bearded Tits at Walberswick followed by Firecrest (which I wasn’t really expecting) and Dartford Warbler at Dunwich Heath.

During the past month or so we have spent time with family, mostly for happy reasons but also because my father suffered an unexpected stroke. Fortunately it was at the mild end of the scale and he is recovering, but these things always cause concern.

Avian and other highlights have included Purple Emperors in north Northants and Rutland (where they are now established and quite easily seen), a series of Yellow-legged Gulls at Eyebrook Reservoir, regular encounters with Osprey and Hobby, and the Little Bustard at Methley which for various reasons was my first in Britain. Two nocturnal recordings made in early August captured just Pied Wagtail, Jackdaw and Magpie (the first nocturnal corvids I’ve recorded, possibly disturbed by human activity).

Now the time has come to look back north to Shetland where we shall be returning soon. What will the autumn bring, and will nocturnal recording prove more productive than it did in spring? 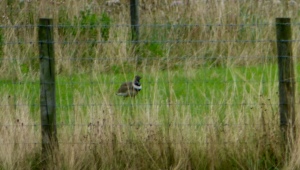 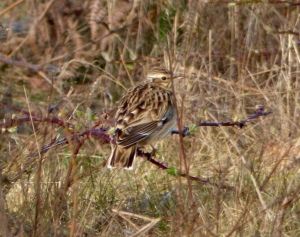 On Saturday I attended the BTO workshop on sound recording, which was a good opportunity to share ideas and experiences and in particular to pick people’s brains about ‘nocmig’ before I try it in Shetland. Thanks to all involved with the organisation of this event.

Before breakfast this morning I spent some time with Woodlarks – the views were quite pleasing but vocalisations were few. Another highlight of the early morning was provided by large (and vocal) flocks of Bramblings.

After breakfast we moved on to Weeting, where we were rewarded with good views of the Rough-legged Buzzard (close enough to see the pale yellow iris) and Stone-curlews. The rest of our day was spent at Lakenheath Fen, where highlights included Garganey, Bittern, Crane and Kingfisher.

Garganey, Lakenheath – a favoured site for this species

Double-figure temperatures have persisted through December, with the result that our lawn (which was parched in midsummer) is still growing – unprecedented.